Mercy Center Ministries is a community based, non-denominational, nonprofit organization founded in 1983 in response to a growing number of homeless young women identified in our communities.   Our first shelter, Mercy Center was donated by local businessman Ric Rose and opened in 1983 in Patchogue.  Mercy Residence opened in 1987 in Blue Point to house pregnant/parenting young women, Mercy House opened in Sayville in 1989 also serving pregnant/parenting young women.  Between the three shelters we serve youth 16-24 years of age, Mercy House and Mercy Residence are our "baby houses" and serve young mothers or pregnant young women.  At this time we are an established agency with structured programs and a full staff of dedicated individuals.  We have a healthy blend of state, business, county, and private funding, as well as our own fundraising events.  We serve homeless women and children from the entire county. 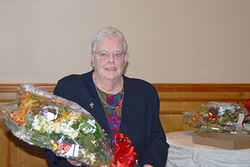 Sister Mary Waters, RSM, LMSW (Deceased)
A member of the Sisters of Mercy, Sister Mary entered the convent in 1958 at 18 and from 1960 to 1976 taught and served as principal of Catholic schools in Brooklyn. Sister Mary also obtained her master’s degree in Social Work from Adelphi University.

In the early 1980’s, she was assigned to run the parish outreach office at Our Lady of the Snow Roman Catholic Church in Blue Point. In her work there she encountered teenage girls experiencing trouble at home, and some who were transient due to those problems.

Sister Mary and the late Teresa "Tee" Kennedy of Bayport, a volunteer in the outreach center, found one girl a place to stay. By 1983 the duo opened Mercy House on River Avenue in Patchogue to house the rest. The home was donated by Ric Rose of the Patchogue-based Clare Rose Inc. beer distributor. Sister Mary served as the Executive Director of Mercy from the time it became incorporated in 1983 till 2001. In 2001 Sister Mary transitioned herself, and continued her career working and traveling for her Sisters of Mercy Mid Atlantic Community. She lived in Blue Point about 1 mile from Mercy visiting regularly and offering guidance and support when necessary, and held an Emeritus position on their Board of Directors. In 2012 at the age of 72 she retired but kept active in the local community and with her family. She passed away July 26th 2014 at the age of 74.

Teresa (Tee) Kennedy (Deceased)
Teresa (Tee) Kennedy graduated from Mount Saint Vincent College in 1956 with a degree in English and taught first grade in Bayport after her marriage to Larry Kennedy.  The first of her five children was born in 1958 and Mrs. Kennedy retired to devote herself to the rearing of her children.  Through the years, the Kennedy house became the place where teenagers would congregate and feel comfortable around the family table.  Her children remember that their mother accepted the teenage crowd for who they were without making judgments.  She understood them developmentally and enjoyed having them around.

In 1980, with four of five children out of the house, Mrs. Kennedy volunteered for Our Lady of Snow’s Parish Community Services doing what was needed, from food pantry to transportation and eventually casework.  During this time she began to see the troubles of teens in the community: abuse, pregnancy, homelessness.  Her passion to care for this group ignited.  Mrs. Kennedy joined forces with friend and mentor Sister Mary Waters, to address the problem of teen homelessness.  Mercy Center Ministries was the result of their efforts.

Mrs. Kennedy marshaled her strong business acumen and terrific organizational skills to contend with the first years of intensive planning and building support in the political and business community.  Her full time effort and focused pursuit for a better life for homeless teens resulted in the opening of the first Mercy Center Ministries home in 1983.  Homes for pregnant and parenting homeless teens followed in 1987 and 1989.  Mrs. Kennedy remained a board member until her death in 2001.
Support Us